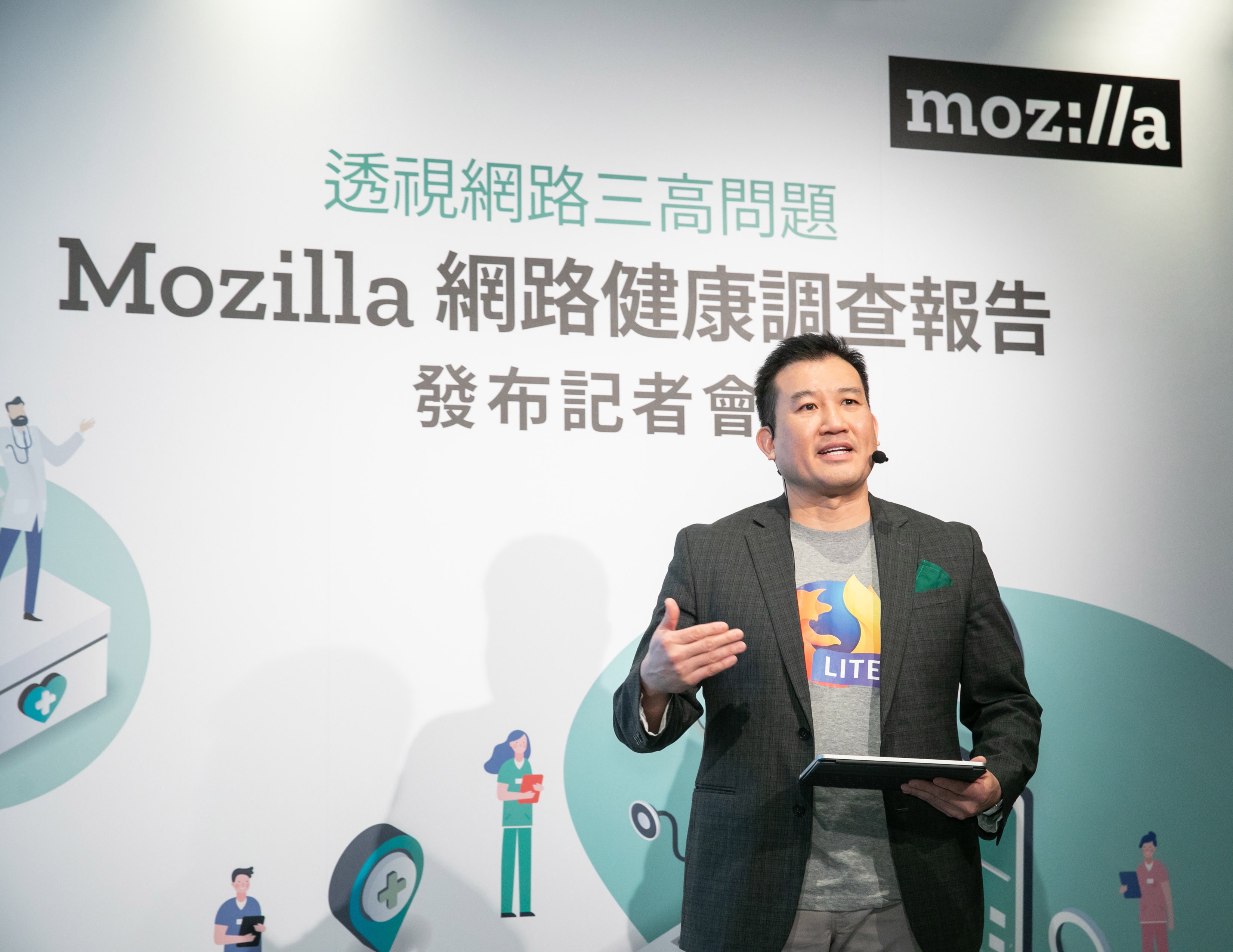 Taipei, Sept. 2, 2019 — Mozilla today released “Taiwan Internet Health Survey”. The survey reveals three worrying hazards found in Taiwan’s internet environment: high privacy risks, severe data monopoly, and rampant misleading information. Based on survey results, the survey categorizes Taiwan internet users into four types, and identifies 61.9% of the respondents as “giraffes”, “parrots” or “sloths”, indicating that the majority of the people are neither clearly aware of the risks of privacy breaches, pervasive collection and abusive use of personal data and fake news/information, nor taking definitive action to address the risks. What’s more, the younger respondents are found to have less awareness and action than the older ones against data monopoly.

At a press conference in Taipei, Stan Leong, VP and General Manager of Emerging Markets, was joined by Benson Yeh, Professor of the Department of Electrical Engineering, National Taiwan University, who is also a leading innovator in digital education. Together, they examined Taiwan internet users’ level of awareness and action toward “privacy risks”, “fake news/information”, and “pervasive collection and abusive use of personal data”, and offered suggestions and solutions to the issues.

According to the survey findings, the respondents have a higher level of awareness about the issue of data monopoly (85.8%) than misleading information (77.5%) and privacy risks (49.7%), and take more action in tackling the issue of privacy risks (76.1%) than those of misleading information (70.9%) and data monopoly (56.4%). With the hazard of “data monopoly” registering the highest level of awareness and yet least action among the respondents, the findings reveal that while most know their personal data may be collected and used by a few tech firms, they take no action to protect their own interests. Meanwhile, although the respondents are most aggressive in their action against “privacy risks”, they are least vigilant about such risks, reflecting that internet users in general are unsure of how to choose secure platforms and services to safeguard personal information even though their online behaviors do not undermine their privacy. Furthermore, despite the buzz around fake news/information in Taiwan, the survey shows that 43.3% of the respondents say they would believe any online content citing expert opinions.

In addition, the survey reveals that younger people have insufficient awareness and action toward the issue of “data monopoly”. Compared with the respondents aged 50 and above, the 29-year-old-and-below cohort is found much more oblivious to the exploitation of personal data by a handful of tech companies, and to have taken less action to tackle such risks. The younger respondents also appear less vigorous than their older counterparts in efforts to prevent privacy risks, signaling a lack of action among young internet users in terms of the protection of their own digital privacy. Meanwhile, the older respondents register poorer level of awareness and little action against the hazard of misleading information. Compared with the younger users, they are more likely to struggle with distinguishing the true from false content, or share false information without fact checking.

“As online business models continue to evolve, invasive internet surveillance has become a common phenomenon,” said Stan Leong. “Today, the digital footprint of internet users is being collected and sold by merchants and advertisers. What’s more concerning is the increasing evidence of users’ digital footprint being used to manipulate public opinions, with the permeation of seemingly trustworthy fake news getting widely distributed to influence voters’ perception and decision-making. We always take the initiative to improve our own wellbeing when we find ourselves exposed to health hazards. Similarly, it is time we also wake up to the risks of the three major hazards to internet health. This is why Mozilla decided to conduct the survey,” he added.

Leong went on to say, “Through the survey, we hope to share with people in Taiwan the experience and resources Mozilla has accumulated in the fight for internet health. We call on all online users to obtain information safely and understand where the content they receive is from and how it is shared in order to curb the spread of misleading information and prevent public panic. In addition, users should proactively take action to prevent their digital footprint from falling into unwanted hands. Precautionary measures, such as refraining from reusing credentials across services or remembering to change privacy settings on voice assistants, can go a long way in curtailing excessive collection of personal data.”

Professor Benson Yeh also offered his views on the importance of internet health education. He noted, “As digital natives, today’s children are exposed to the internet at an early age — before they have learned how to protect themselves in the online world, including not using birthdays as passwords, not giving out personal data freely and watching out for phishing scams. In Taiwan, there are more than 20 legal regulations associated with cybercrimes, ranging from articles combatting the spread of false rumors and spams to articles criminalizing internet fraud. Unalarmed and unaware of the dangers online, kids may unintentionally and unknowingly violate the law when they venture into the internet. Both parents and schools need to pay extra heed to educate kids on the hazards of the internet, equip them with internet literacy and enable them to thrive and grow in the online world safely and happily.”